I promised those of you who attended my final Stuhr Museum demonstration that I would post the finished painting from that event.

In my studio, all alone with myself, my mind is completely engaged in the work of my hand, analyzing color and value immediately as it is applied. I can mumble and talk to myself without the burden of actually making sense. I get to wear comfy clothes. Distractions are at a minimum.

Those of you who have taken on the role of painting demonstrator and lived to tell about it understand that its a challenge to focus both on the creative act and the conversational element.


Its a bit unnerving to know there are people behind me watching my every move. I felt a tremendous urge to be good, really good at what I do. I was also acutely aware of the fact that I needed a haircut and that my cowlick was unusually rowdy that morning. The cute top I chose to wear felt funny on my neck; the bowl of chocolate covered pomegranates nearby whispered my name repeatedly.

For those of you who weren't there, this is where we ended up after nearly 3 hours of painting, laughing, conversing and nibbling some delicious snacks. 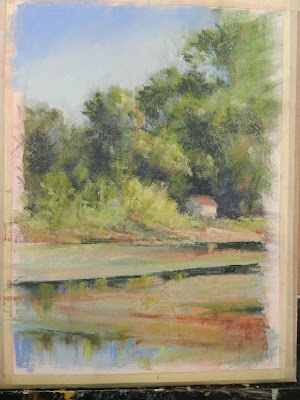 It's a fairly decent start but needs lots of help.  After considerable thought, I swept off a few overworked areas and gave the entire piece a spray of workable fixative.  My plan was to darken the darks without adding more pastel, which the fixative does, and re-work some areas that felt clumsy. 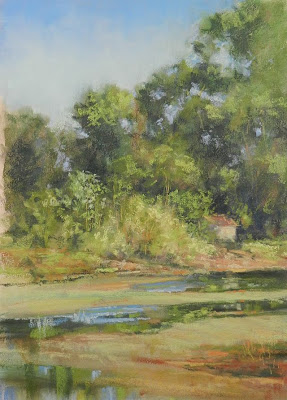 ...several hours later I'm calling it done. This part of the process takes time, and it's time mostly spent making a mark, pondering, making another mark, and pondering that. There's probably more thinking than painting going on. Which, during a demo, can be dull as toast, and why many paintings don't get finished during these events. 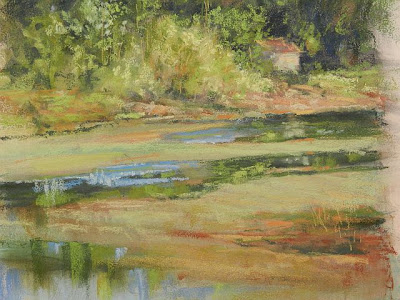 To see paintings that are actually finished and framed, stop by Stuhr Museum, in Grand Island, Ne.  Land Marks and Wings Over the Platte are on view during regular business hours until then.  Consider coming to the closing reception on April 1st from 2 to 4, just to say hello. It'd be great to see you there, and I'm fairly certain that my cowlick will be under control.
Posted by Patty at 8:00 AM 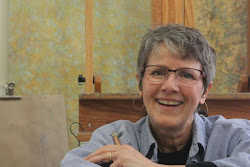 Patty, as she is known to her friends, is dedicated to keeping her fingers dirty and her brushes full. See her complete collection at www.pscarborougharts.com

Promote Your Page Too

Every six weeks or so I send out a newsy bit of info about life in my studio. Sign up here if you'd like to be on my list.

Places to Go, People to See

You can also find my work at these fine galleries:
The Burkholder Project in Lincoln, Ne. and the Anne Thorne Weaver gift shop at the Museum of Nebraska Art Gift Shop in Kearney, Ne.